I have a nice metal clay project in progress which I will post on soon. While waiting for that, I that I would mention some of the activities that have prevented me from posting.

I attended the John C Campbell (https://www.folkschool.org/) Folk School’s annual Scottish Heritage Week. For those who don’t know, the Folk School teaches various arts and crafts in a non-competitive environment. One can accomplish an amazing amount in a week if all one’s needs, other than art, are taken care of.

Scottish Heritage Week is just what it sounds like: a week in which all the classes are devoted to arts associated with Scotland. I took a class in willow basketry.

I had done basketry before. Baskets made from reed or sea grass or lathes are a different animal from baskets made from willow branches. Willow requires a substantial amount of physical effort to get in place.

At the start of the week, everyone made a similar bread tray. 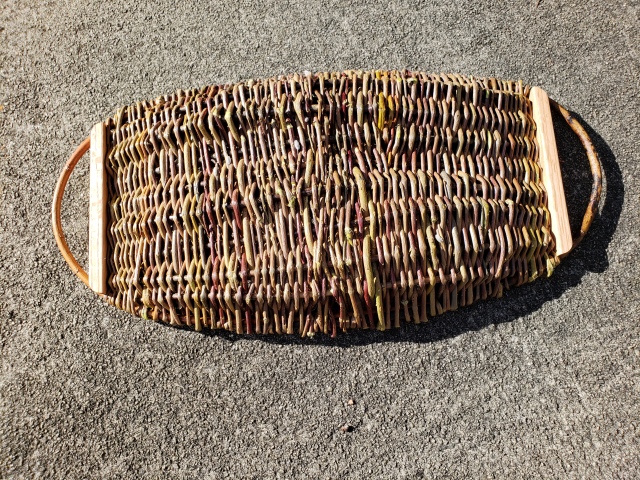 The tray was about three inches deep. Since I chose to put the ends of the willow shoots on the inside, I chose to photograph the outside.

After that, people were free to go in their own direction. I chose to make a historic piece — a willow basket of the type that was used to gather wool that sheep leave behind on brambles and trees. To keep the wool from blowing out, the opening is small. The basket itself is fairly deep, to hold as much wool as possible. Historically, this type of basket has no handle. I’m not sure why, but I made mine similarly to respect my source. 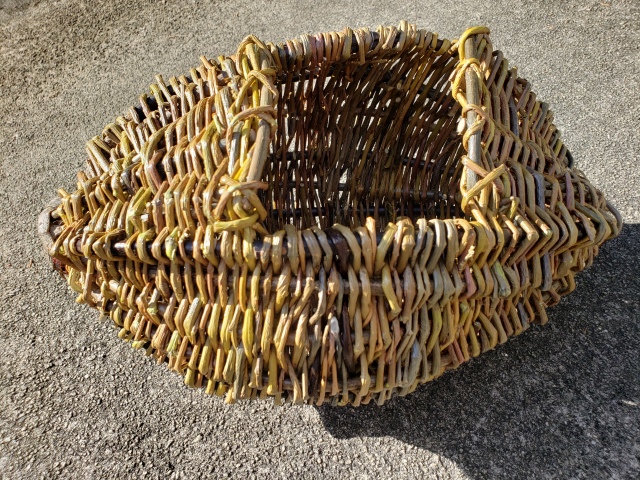 Most people made three baskets. I only made the two because the wool basket was, honestly, above my skill level as a basket maker. However, I chose to do it anyway from interest in history.

If you have a chance to visit the John C Campbell Folk School, I encourage you to do so. They teach metal clay. However, they also teach many other arts.