Metal clay is great for pendants, earrings, and rings. Occasionally, one can use it to make small decorative items, like a small bowl. Many people avoid making physically larger projects. There is no reason to do so, other than the expense of the clay. That is not an important factor, if one uses bronze clay. Here, I am going to describe using bronze clay to make a cuff.

Before talking about how the cuff was made, I want to give a little background. The decorations I chose were based on a petroglyph. That is just my interest and background. You, of course, can decorate a cuff in any manner that you wish. Making a cuff the way I did requires a small amount (hardly any, you can pick it up even if you have never done metalsmithing) of metalsmithing skill and tools. Also, I tried using both Five Star Light Bronze and Fastfire Bronz clay. While I have had nothing but success with Five Star products in the past, I was unable to get the Five Star cuff to sinter. I do not know if it is because I made some error, or because Five Star doesn’t do as well for larger objects. I mention this as a caveat. I intend to experiment more with Five Star, and will post results later. 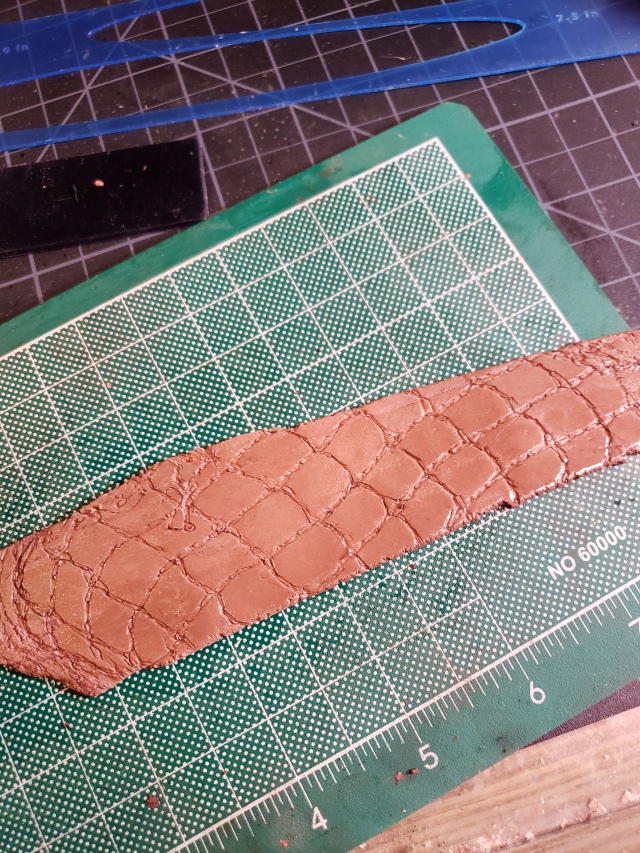 The first issue I want to raise is that, to make a cuff, one needs to work with larger pieces of clay than more traditional projects. The cuff I wanted to create was 7 inches long, in unfired clay. That means rolling out, and texturing, a piece of clay that is at least 7 inches long. Since a cuff will be subject to a bit more stress than an earring or pendant, I chose to make it 1.5 mm thick. If  you are not used to working with so much clay at one time, this might take several tries. Also, I chose to texture the clay by rolling it (originally 2 mm, rolled to 1.5 mm) over one of the net bags than tangerines come in. This gives a nice reptile-skin appearance, and goes will with the lizard I eventually planned to put on the cuff. This can serve as a reminder — texture sheets are great, but there are an almost unlimited number of ways one can texture metal clay. 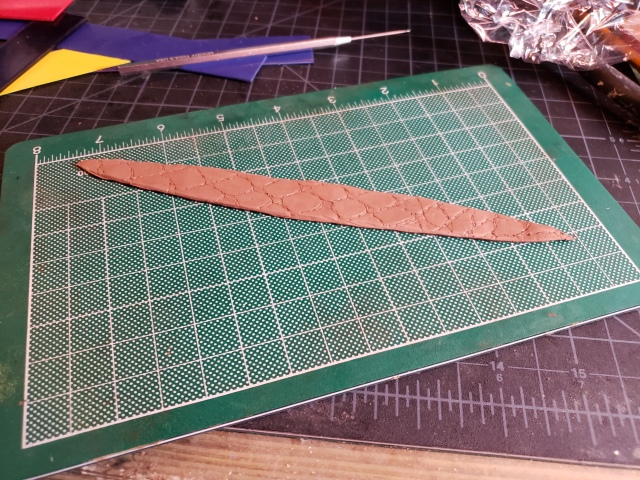 Next I cut the shape of the cuff. I made it tapered. Of course blunter, even square, ends would have worked just fine. However, since someone is going to eventually wear the cuff, make sure that nothing too sharp remains. This can be fixed when one deals with the greenware. 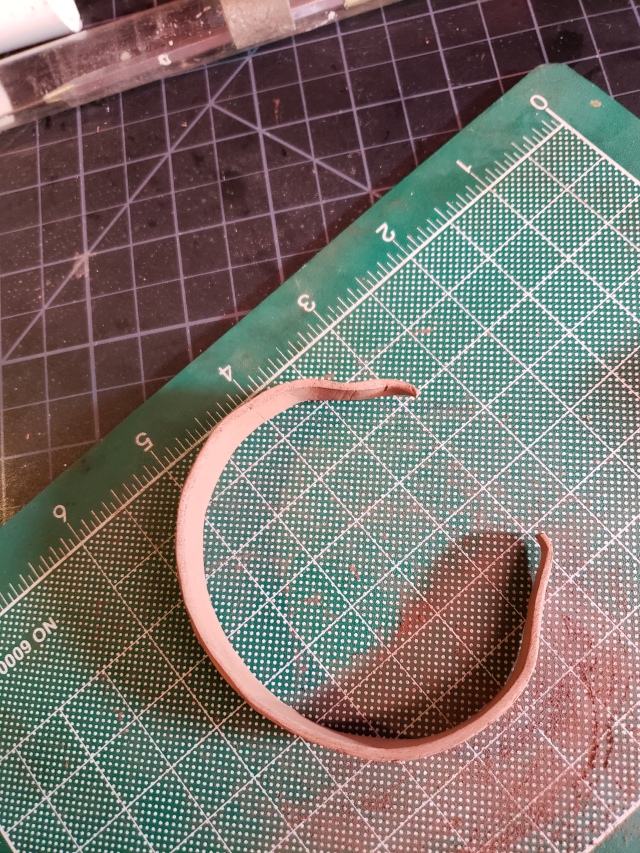 People who make cuffs with traditional metalsmithing methods have arm-shaped mandrels, usually wooden. These mandrels are readily available from any metalsmithing supply company, such as RioGrande.com. However, if you use a wooden mandrel, be sure to cover it with plastic wrap before draping the cuff over the mandrel. I used small plastic items around my shop to hold the ends of the cuff on the mandrel while it dried. As can be seen in the picture above, this resulted in the ends being slightly misshapen. This is easily fixed (after the piece has fired) with a special type of pliers, used by metalsmiths to bend rounded objects.

After the clay had dried and I had refined it in the usual manner, I added a Native American styled lizard and sun (referencing a specific petroglyph I remember from when I lived in Nevada, years ago). The cuff was then fired in coconut charcoal, more or less by package directions. Since larger objects often take longer to sinter, I fired it for 2 hours instead of the 1 that the package instructions indicate. I then tumbled and applied a light patina.

This piece demonstrated how a bronze cuff can be made. In making it, I learned some things about sizing a cuff and how much a cuff needs to be bent to fit correctly. Also, some parts of the texture worked out better than others. That’s why I made the cuff in bronze — so I can learn what to do without using terribly expensive materials.

Right now, I have a second cuff on my workbench. When it is done, I will provide an update. With a little patience with the learning process, I am certain the bronze cuffs will prove a worthwhile exercise in metal clay.