CZs can let you produce nice work. However, they could be shinier. Also, a few CZs, like the green ones, can be problematic — they can change color (and never in a good way) in the kiln.

A potential fix to this is a new type of stone called the nano-gem (https://www.cooltools.us/Nano-Gems-s/2594.htm). Nano-gems are very shiny, and (with a few exceptions) are supposed to survive being fired at a fairly high temperature. I decided to put this to the test by making a ring with a green nano-gem and firing it at 1600 degrees F. I chose green because that is the color that has, in the past, been the most problematic with CZ.

The ring itself was a standard silver clay ring (Art Clay, although I’m sure any other brand would have done as well), so I won’t go into detail about how it was made. The ring, in greenware, appears below.

After standard filing and preparation, I fired it at 1600 degrees F for 1.5 hours (let’s give that stone an acid test). Then I tumbled it and applied a patina. What happened? See the two pictures below. 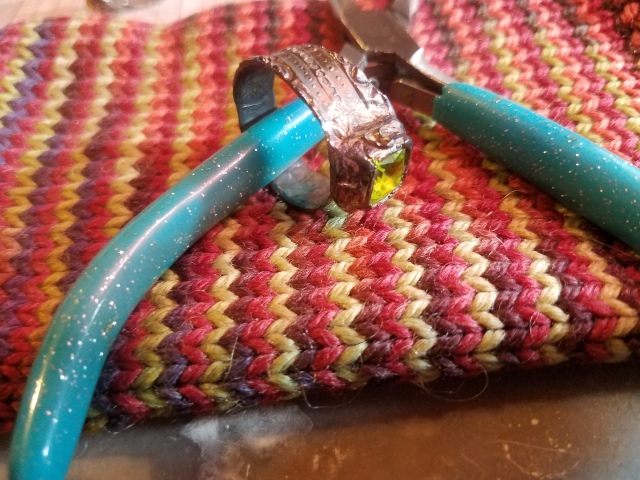 These photos don’t do it justice. The stone is just as shiny after firing as it was before. I now give nano-gems my unrestricted approval.

There is one small drawback. The website says that a small opening must be left behind the gym, or the stone can turn cloudy. Since putting an opening behind the stone is easy, that isn’t too much of a drawback.

Finally, for no particular reason, I am including a photo of some opal earrings I made at the same time I made the ring. Why? Because they are shiny. 😉