This post is a little different, because I’m not including much in the way of instructions. I recently took a class in basse-taille, an enameling technique in which translucent enamel is placed over a texture. This means that the texture can still be seen through the enamel. The class was taught by Pam East (pameast.net). I’m not being terribly specific about methods because teaching is part of her livelihood, and it would be unfair of me to say what she taught in the class.

The class worked with Thompson enamels. They have the advantage that their numbering system (all enamels have a four digit numerical code) provides actual useful information. If the first digit is 1, the enamel is opaque. If the first digit is 2, the enamel is translucent. The second digit tells the color; for example, 3s are greens. The third and fourth digit tell how dark the enamel will be — the higher the number, the darker the enamel.  Thus, 2310 is a translucent green enamel, and so it 2340, but the latter is darker.

We learned that blues, greens, and browns fire consistently clear, and the other colors can sometimes have a bit of muddiness to them.

We learned two forms of basse-taile. In both, textured pieces are made with metal clay. The fired pieces must be tumbled a long time, as much as overnight, to be burnished enough to take the enamel. In one technique, a shadowbox is made — a rim of silver is placed over a textured background. In the other, syringe is used to build up a bezel around a flat piece.

While most people chose to work with a raised texture, so that silver would shine through the enamel, I only did that with one of the two pieces. With the other, I chose an incised design. I filled the recessed design with one color of dark enamel, and then put a layer of pale enamel of another color atop it. This gave a wonderful appearance of depth.

The two pieces I made in the class appear below. 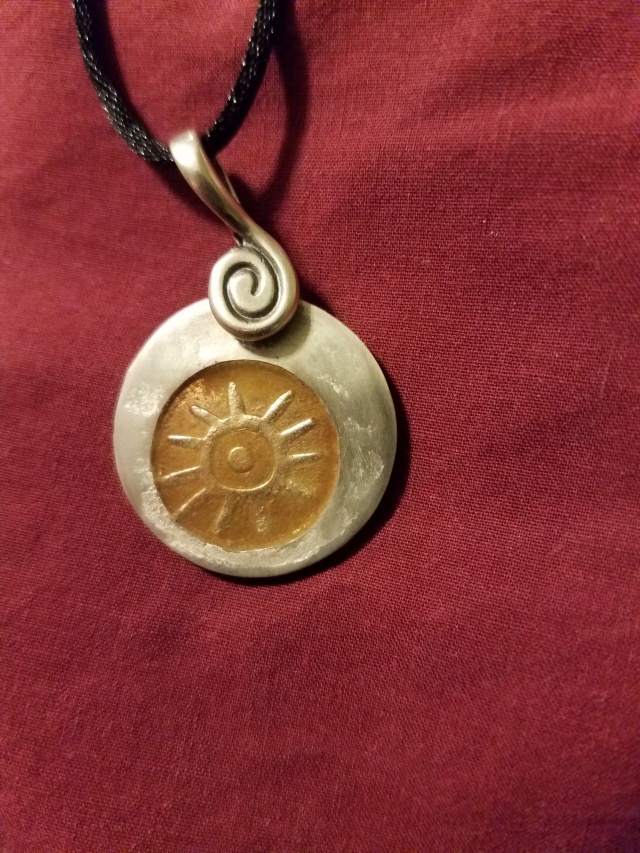 As I said, it would be unethical for me to give step by step directions on how to do basses-taille. However, I hope these pictures have inspired you to seek out someone who can teach you. And, if you have the opportunity to take the class from Pam, she is a wonderful teacher.