Mokume Gane is a Japanese technique for producing a piece with layers of different metals, usually that fold and bend so that the final product resembles the grain of wood. It can be done with metal clay, usually copper and silver. (For a quick tutorial on Mokume Gane with polymer clay, see   https://katersacres.com/polyclay/tutorials/polymer-clay-mokume-gane-tutorial/).

The problem is that one winds up discarding quite a bit of silver clay, and silver clay is expensive. It occurred to me that Five Star brand clay comes in copper and a variety of colors of bronze. Five Star clay is relatively inexpensive? Could I make Mokume Gane using Five Star clay? (Spoiler: the title of this post tells you it didn’t work — at least not the way I had hoped.) (Full disclaimer: I have been extremely happy with Five Star clay — it has worked fine for more conventional pendants and earrings.)

I won’t go through all the details of Mokume Gane, since since doing it with metal clay is not that different from the steps for polymer clay, and those are outlined in the link above. Suffice to say that I made the loaf of Five Star copper, white bronze, and red bronze

I made two pendants and a pair of earrings. Nothing more will be said about the earrings; for reasons unclear to me, they failed to sinter properly). However, the two pendants, in greenware, appear below.

Five Star tells us that all its bronzes and coppers can be co-fired, although they have different firing temperatures. This is done by firing at the lowest temperature and firing for a longer time. The white bronze had the lowest firing temperature, so that is what I went with. Five Star tells us to fire for two hours. Since the mixture I had created might have alloyed, I was unsure of the firing time. I went with three hours.

The products that came out of the kiln were:

So, nice pieces? Yes. Mokume Gane? No. The tree shows some variation in color; it showed in reality much better than it did in the photo. You can see a hint of it if you look. The right edge of the tree is lighter in color, the center is more coppery, and the left is more like red bronze. The dragonfly had no trace of different colors. However, there was nothing wrong with the work — other than not turning out like I hoped.

After adding a patina and spraying with a fixative so the metal would not further change color, the pieces looked like this: 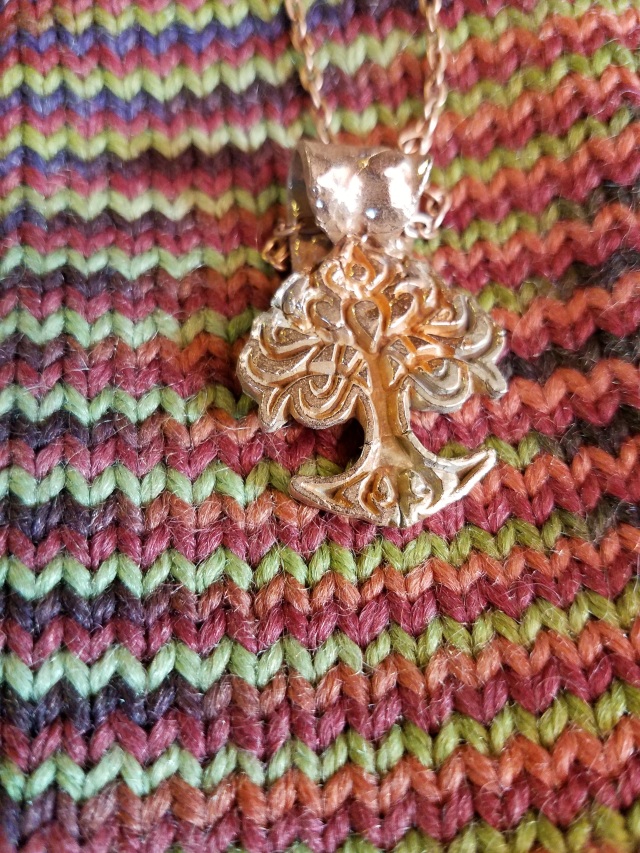 Bottom line: Five Star products are fine for use as metal clay. I use them regularly. They even work for combining colors of bronze (e.g. one part of a pendant of red bronze and another of white). However, for Mokume Gane, they don’t seem to work. For now, unless someone more clever than me finds a way, Mokume Gane requires discarding a fair amount of expensive silver clay.

Caveat: If some reader has tried this with success, I would love to hear about your technique.